Animal populations are often studied by trapping individuals, marked or otherwise distinguishable, at discrete points in space or by searching an area for sign. The statistical analysis of such data to estimate population density or size is more robust and effective if it accounts for the spatial distribution of sampling. There has been rapid growth of relevant methods and software in the last few years, but these have yet to appear in standard texts. Spatially explicit capture–recapture (SECR) analyses are used widely for bear populations sampled with hair snags and for large cats caught on automatic cameras. The methods extend to grid trapping of small mammals, mist-netting of birds, DNA from feces, and sounds recorded on microphone arrays.

This 3-day short course introduced the core concepts of SECR, the free Windows software ‘Density’ and the R package ‘secr’. There was some time set aside to discuss participants’ data. Specific topics covered included: 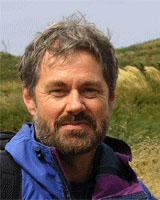 Dr. Murray Efford is a population ecologist with long experience in live-trapping studies. He has recently focused on developing spatially explicit capture–recapture methods, and acoustic methods for assessing bird populations. He is the author of the Windows software ‘Density’ and the R package ‘secr’, and has presented SECR workshops in New Zealand, Malaysia, UK, and Canada.