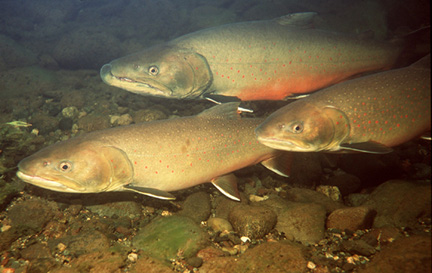 The fresh waters of the world house spectacular diversity of freshwater fishes, accounting for over 40% of all described taxa in less than 0.01% of aquatic habitat by surface area. British Columbia has a relatively small number of described native species (69), yet contains a considerable wealth of un-described diversity and endemic species. This course serves as an introduction to the biogeography, evolution, and identification of native and introduced freshwater fishes found in British Columbia. Two lecture sessions focus on the biogeography, evolution of our fauna, as well as the morphological and molecular genetic techniques used in fish identification. Two afternoons focus on morphological-based identification of fishes, particularly those of the southern Interior of BC. Attendees will also have the chance to try out a new pictorial guide to the freshwater fishes of BC.

ric (Rick) Taylor is a Professor in the Department of Zoology at the University of British Columbia (Vancouver). He is also the Director of the Beaty Biodiversity Museum and the Director of the Fish Collection. He conducts research on the evolutionary genetics, ecology, and conservation of freshwater fishes, specializing on those of western Canada. He has worked extensively with government resource agencies and private companies on issues related to fish biodiversity. He has been involved with the Committee on the Status of Endangered Wildlife in Canada (COSEWIC) since 2002, first as a subcommittee member, then as one of its two Co-chairs (2008-2015). In September of 2014, he became Chair of COSEWIC.

What to bring: Nothing needed but your curiosity! These things may come in handy: note making materials (pen, paper) and wear clothes appropriate for the lab (e.g., no sandals). The fish we will examine are in isopropanol (but washed in water before use). Gloves will be supplied (bring your own eye protection if you want it).

Day 1: 9:30-10:30 – Lecture: Introduction to the freshwater fish fauna of BC: origins,
diversity, biogeography, “species” at risk

11:00-12:00 – Lecture: The basics of morphological-based ID. The geography of a fish, keys,
geographic variation, specimen prep, reference specimens at the BBM, pitfalls. The families of
freshwater fishes.

The Columbia Mountains Institute would like to give a big THANK YOU to our event partner: