The Messenger: Birds Have Something to Tell us

Award-winning documentary was  screened as part of the CMI’s forum: Avoiding Incidental Take of Bird Nests – from Law to Practice. This film screening is open and free to all that wish to attend. Dr. Erin Bayne, leading avian ecologist and featured scientist in the film, provided an opening address and took questions after the screening.

The Messenger, a new documentary by award-winning filmmaker Su Rynard chronicles the struggle of songbirds worldwide to survive in turbulent environmental conditions brought about by humans and argues that their demise could signify the crash of the ecosystems globally, akin to the disappearance of honey bees and the melting of the glaciers.

For thousands of years, songbirds were regarded by mankind as messengers from the gods. Today, these creatures – woven inextricably into the fabric of our environment – are vanishing at an alarming rate. Under threat from climate change, pesticides and more, populations of hundreds of species have dipped dramatically. As scientists, activists and bird enthusiasts investigate this phenomenon, amazing secrets of the bird world come to light for the first time in this acclaimed and visually-thrilling documentary. Beautiful slow-motion photography illustrates the power and beauty of these delicate winged creatures that have been praised and eulogized across cultures and throughout time.

“Without a doubt, The Messenger is the most outstanding film I’ve seen on birds. The fact that it is so strongly science-based, so emotive in its pitch, so beautiful in its design it captivates me and everyone who has had a chance to see it.” — Steven Price, President, Bird Studies Canada.

Since its world premiere at Toronto’s Hot Docs Film Festival, The Messenger has wowed audiences the world over at more than 30 international film festivals, played in over 100 US Cinemas, and is available on US Netflix. A Hot Docs 2015 ‘Top Ten Audience Favourite’, it has received several awards, including The Best Conservation Program from Jackson Hole Wildlife Film Festival, Best of Fest and Best Theatrical Feature, International Wildlife Film Festival plus a Canadian Screen Award nomination for Best Cinematography in a Feature Documentary and the Ontario Nature’s Carl Nunn Media Impact Award.

See the film trailer and read more about this film here 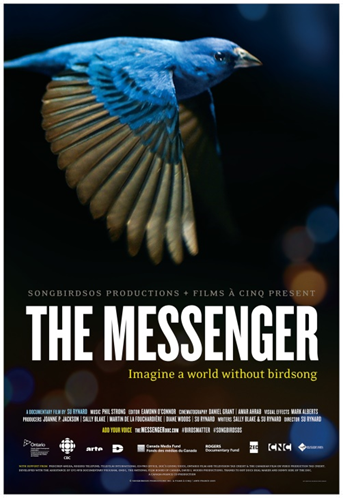