Among the most frequently asked questions by park visitors is, “Where are the bears?” We seldom know specifically because bears move about, always seeking the best food source. But in late summer and autumn, the best bet for where the bears are, is in the berry patches.

This question was also on our minds as Park Biologist John Woods and I hiked this September (2001) to 20 Mile Cabin, our base of operations situated 23 kilometers up the Beaver Valley on the east side of Glacier National Park. Unlike any other in the park, the trail along the Beaver River remains low in the valley, passing through a patchwork of different-aged stands of cedar, hemlock, and spruce, many with a diameter of well over a meter. This valley is among the largest undisturbed forests remaining in southern British Columbia.

The cabin name dates back to before the Trans Canada Highway traversed Rogers Pass (1962), when park wardens accessed their patrol cabins from the nearest railway stop. The cabin is situated at a strategic backcountry crossroad with a trail running north-south along the Beaver River and east-west from Caribou Pass (at the head of the Spillimachean Valley) to Glacier Circle. A short distance from the cabin, a cable car provides a crossing for the Beaver River. We were but the third party this year to record our stay in the cabin log book. 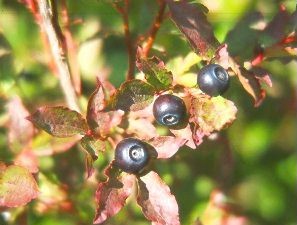 Research results from radio-collared bears in the late 1990’s indicated a strong preference for a particular old burn in the Beaver Valley, south of Glacier Circle. It’s a huckleberry patch extraodinaire. Typically, the best berry patches occur in areas of forest that burned about 25 years ago. It takes that much time for berry plants to fully establish themselves, taking advantage of the increased sunlight to the ground and the nutrients released to the soil after a fire.

North of this berry mecca is a rugged path from the Beaver Valley to Glacier Circle, a long standing mountaineering destination more frequently reached by ski touring parties traversing the Illecillewaet Icefield. The trail was chipped out of the mountainside earlier in 1990’s before the bear research project results were known. About half of Mount Revelstoke and Glacier National Parks can be bear habitat at some time. We try to keep visitor facilities away from the areas most used by bears, but bears move around.

The Glacier Circle trail climbs steeply to the slopes beneath Mount Macoun, suitably named for the first professional biologist hired by the Dominion of Canada. The trail soon leaves forest behind and traverses an old burned area with the most diverse offering of berries I have ever seen in one place. Scattered patches of huckleberries, blueberries, raspberries, elderberries, currants, and mountain ash offered a diversity but not necessarily an abundance to interest a bear. There was also ground raspberry and bog cranberry but these small berries would only interest a grouse or ptarmigan.

Bears are not fussy eaters but will select the highest calorie food in order to maximize their reward. At this time of year they eat with purpose, increasing their body weight by about 25% to fuel their winter dormancy. Female bears have the additional demands of giving birth in the den in February and nursing their cubs until they emerge in May. Not surprisingly, bears are highly motivated to put on weight throughout the summer and fall.

Despite the diversity of berries on the Glacier Circle Trail there were no fresh bear scats, though I found two rub trees with a few bear hairs. Likely the concentration of huckleberries was better elsewhere. As huckleberries offer the highest sugar content, they are the preferred food.

This year our local bears enjoy the benefit of a good berry crop, unlike the bears in the Rocky Mountains of southeastern British Columbia where a dry summer withered this year’s crop. Natural food sources vary year to year and place to place which is why bears need large areas in which to live.

After hiking 55 kilometers we did find one fresh bear scat on our way back to the highway. It was full of partially digested wheat probably gleaned from a leaking grain car along the railway, which goes to show you can’t be too sure of where the bears are.