A century ago, the Canadian Pacific Railway began using the Selkirk Mountains as an opportunity to attract the first tourists to this area. In the minds of CPR executives, the Columbia Mountains had changed from construction obstacles to grand scenery and they marketed our mountain landscapes around the world.

Because the rail grade through Rogers Pass was steep, steam locomotives of the day were unable to pull heavy dining cars with the rest of the passenger train. Instead, meal stops were built at strategic locations along the railway. One of these was Glacier House, situated behind what is now the Illecillewaet Campground in Glacier National Park.

Named for its proximity to the Illecillewaet Glacier (which extended two kilometers farther down the valley than it does today), Glacier House was popular with passengers getting off the train to stretch their legs and have a meal. They asked for rooms, and the railway responded by building a lodge in 1887. Over the next four decades Glacier House expanded several times to include an observation tower, bowling alley, horse stable, and British Columbia’s second ever hydro-electric generator.

But it was for mountaineering that the hotel became best known. With the arrival of Swiss mountain guides in 1899, Glacier House attracted a clientele from Europe and the eastern United States inspired by the untrammelled wilderness of the Selkirk Range.

Then as now, things change. The Connaught Railway Tunnel, built to avoid the portion of Rogers Pass most threatened by avalanche, meant that Glacier House was by-passed 1916. The rambling wood structures of Glacier House had seriously deteriorated by 1925 and were closed. Stone and cement structures were planned to refurbish the hotel. Ironically, these aborted footings are the most obvious remains at the site today.

While the area around Rogers Pass had been set aside as a federal reserve in 1886, it was not until the National Parks Act of 1930 that legislation demanded a conservation role from national parks. But the Glacier National Park boundary had not been chosen with the intention of making it a self-sustaining ecological unit. Rather, its borders today reflect its history of railway route and alpine playground.

Over half of Glacier National Park is above treeline. It is spectacular to look at and hike around in, but it lacks low elevation habitats required by many species of wildlife. Valley bottoms in the park are dominated by the highway and railway and use of the transportation corridor increases every year. Of that half of the park that is forested, much of it was burnt during the construction of the railway in the 1880s. Consequently, very little of the park is low elevation old growth forest, the type of habitat becoming scarce throughout British Columbia.

Glacier National Park is used extensively by wide ranging animals such as grizzly bears, mountain caribou, wolverine but most of these animals leave the park at some time during their annual travels. These parks are too small to provide enough habitat for viable populations of these species. 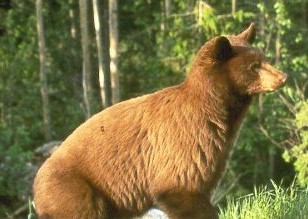 In an effort to manage resources on an ecosystem basis, Parks Canada co-operates with provincial land use agencies on a variety of ecological research projects to obtain information needed for the long term conservation of wildlife that roam over large areas. For any national park to succeed in preserving nature, it must consider what is occurring around its boundaries and seek the cooperation of adjacent land use managers.

In many ways, our national park is as wonderful as when the first visitors arrived at Glacier House. But managing Glacier National Park for conservation, recreation and transportation is an ever-increasing challenge, as we revise the role of the park from scenic backdrops to a core area for conservation.