Renown for its heavy snowfalls, the Columbia Mountains are a difficult place to live in winter. In the case of birds in Mount Revelstoke National Park, crossbills succeed through a combination of physical adaptation and behavior. Found in northern forests around the world, crossbills are highly specialized foragers equipped with crossed mandibles perfectly adapted for extracting seeds from conifer cones. They travel in flocks that may suddenly appear in an area, breed, and then disappear as abruptly as they came. Breeding can occur at any time of year, provided that there is abundant food for the high energy demands of laying eggs and feeding young.

As part of the annual continent-wide Christmas Bird Count, John Woods and I conducted a survey of birds in Mount Revelstoke National Park by ascending the Summit Trail on skis. The preceding two days of near constant snowfall made for heavy trail breaking. We sought birds more by listening than by looking. Falling snow, dim December light, and dull winter plumages made seeing birds difficult, so finding birds was better accomplished by ear. 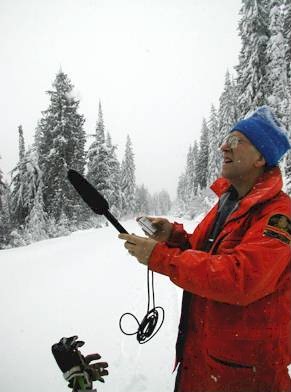 To hear the White-Winged Crossbills (and helicopter) he is recording, click here (340 KB wav file)

By far the most numerous of the nine species of birds we observed that day were two kinds of crossbills; the Red Crossbills on the lower part of the mountain, and the White-winged Crossbills midway to the top. Their distribution coincided with changes in the composition of the forest.

The lower slopes of these mountains are part of the world’s only inland rain forest. Old growth stands of Western Red Cedar, Douglas Fir, and especially Western Hemlock provide the most reliable cone crops. There are at least five types of Red Crossbill, each specifically adapted for extracting seed from a particular species of conifer, though we were unable to distinguish that as they swarmed the tree tops demolishing cones.

Initially we thought that the Red Crossbills would be the most numerous of the birds we saw that day. This changed when we reached 1200 meters elevation. At this elevation, the forest changes to the snowforest, a higher, cooler part of the interior wetbelt. Most of the moisture it receives comes in the form of snow. A tree living with heavy snow needs to contend with loading. The more streamlined shapes of Engelmann Spruce and Subalpine Fir survive here better than other trees because they shed snow instead of being toppled by it.

We first heard, then saw, flocks of 50 or more White-winged Crossbills among the spruce tops, evidence of a big cone crop this year. Most northern tree species do not produce great crops of seed every year. Big seed years are usually followed by a variable number of years in which smaller crops are produced. Unpredictable seed production may be a defense from seed-eating birds and squirrels. In some years, birds and squirrels are swamped with more food than they can eat, and in other years, they are starved out. Thus the seed eaters can’t expand their populations to consume all available seed and undermine the tree’s reproduction. Crossbills counter the variable seed production with their nomadic lifestyle, seeking regions of cone abundance.

Crossbills seldom live to the age of four, testament to a life in a difficult and unpredictable environment. Fortunately, my life is easier. By mid-afternoon on Mount Revelstoke, I’d eaten my last cookie and finished my thermos of tea. We made our descent through deep powder snow, pleasantly tired and ready to return to the comforts of the valley.