Only a quarter of bird species that breed in and around Mount Revelstoke and Glacier National Parks in summer remain here in winter. Another quarter of them migrate a relatively short distance to the western United States. The remainder go to Central or South America. An exception to this migratory regime are a few specialized seed eaters (Crossbills, Pine siskins, Redpolls) who, attracted by this region’s usually prolific cone crops, sometimes come here to pass the winter.

Birds migrate for food. Those that live in the tropics for nine months of the year are attracted to spend the summer in northern areas by our temporary abundance of insects. It’s a particularly rich food source on which to feed their emerging families.

Of the migrators, the species with the farthest to go leave the earliest. They do so instinctively, driven by a genetic pre-disposition. Generally, adult birds depart in late summer before their offspring. The recently fledged birds are left on their own to avoid predators, to gauge weather conditions, to find food and their winter destination.

Continental bird monitoring shows that despite the rigors of flying south, migrating birds typically live longer and produce more young than resident birds left to face the demands of winter.

Oddly, some migrants don’t even take the shortest route to the tropics. Genetic analysis of Swainson’s Thrush that breed near the Skunk Cabbage Trail in Mount Revelstoke National Park shows that they belong to a race that in summer occupy the interior of the continent from Alaska to Newfoundland. Departing in August, they first travel thousands of kilometers east before turning south to Florida, retracing their genetic heritage. From Florida, they island hop across the Caribbean to South America, some continuing as far as Argentina.

The other race of Swainson’s Thrush are found along the Pacific coast, between Alaska and Central America. They simply move north and south along the coast with the seasons.

A bird monitoring program at the Skunk Cabbage Trail in Mount Revelstoke National Park had contributed information on survivorship of birds and provides researchers the opportunity to study their movements. Like many drab coloured birds, this Swainson’s Thrush is a brilliant singer, but he’s only ever heard on his breeding grounds; here, in summer. This bird is one of 133 Swainson’s Thrush banded at the Skunk Cabbage Bird Monitoring Station over the past decade. Our local Swainson’s Thrush are thought to descend from ancestors once isolated from their western cousins around 18,000 years ago when ice covered nearly all of Canada. During that Ice Age, a large desert in the middle of what is now the United States separated many plant and animal species into two refugia for thousands of years. The slight genetic differences between the races of Swainson’s Thrush date from that time when the two groups could not interbreed. 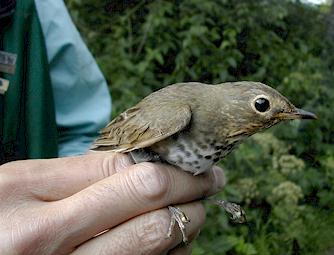 As the climate warmed 10,000 years ago, the continental glaciers retreated and forests extended north again. The eastern race of Swainson’s Thrush aggressively expanded its breeding range from Florida north and west across Canada as far as the Alaska interior. Their west coast relatives venture no farther than 100 kilometers inland, demonstrating a different genetically programmed behavior.

Genetic variability helped this species recover from the devastation of an Ice Age. In the future these genetically driven behaviors may or may not continue to succeed as climates and habitats change. There’s no predicting which set of genetic cards will win nature’s poker game. Likely the most resilient species, or societies for that matter, will be the ones with the greatest assortment of genes and behaviors. In nature, diversity is always a good thing.