How to use barbed wire to get a DNA sample from a bear was the topic of a Columbia Mountains Institute of Applied Ecology course on October 2, 2001. Fifteen people from across Alberta and British Columbia attended a one-day session in Revelstoke offered by instructor Michael Proctor of Kaslo.
“Biologists and conservation officers realize that the use of DNA is an expanding field. They can’t get this kind of training anywhere else,” noted course organizer Jackie Morris.

Proctor is a Ph.D. candidate at the University of Calgary studying the dispersal and habitat fragmentation of grizzly bears in southern British Columbia and Alberta. He uses the barbed wire technique to snag hair, which is later analyzed to provide a DNA fingerprint for individual bears. There’s enough DNA in the root cells of a single hair to be able to tell what species it is, its gender, and who it is as an individual.

The technique was developed in the Golden area by Proctor and others when he volunteered to try out an experimental way of counting bears as part of his Bachelor of Science thesis during the Upper Columbia Bear Research Project, a joint effort of Parks Canada, BC Ministry of Forests, BC Ministry of Environment, Columbia Basin Fish and Wildlife Compensation Program, and the Friends of Mt. Revelstoke and Glacier. This harmless, non-intrusive method is now used around the world on a range of fur bearing animals.

While DNA analysis is complex, gathering hair samples is relatively easy. A knee-high perimeter of wire is stapled to some trees to form a small “corral” and a bag of scented bait is hung in the centre, high out of reach. A bear in the area, following its nose, comes and goes under the wire and unknowingly leaves a sample of its fur. The bear is the only moving part of this trap. 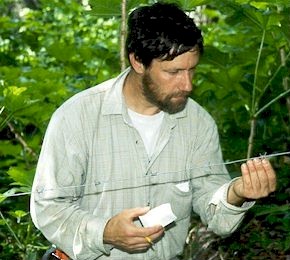 The morning portion of the course dealt with the uses of DNA in wildlife studies and the intricacies of genetic analysis. The afternoon session on Mount MacPherson demonstrated the tricks to setting up an effective barbed wire hair trap. To the instructor’s delight, a dog belonging to one of the students running around the set-up inadvertently demonstrated the effectiveness of the barbed wire by leaving behind great clumps of loose hair.

Researchers and wildlife managers can now census bears by using DNA from hair to identify individuals and their movements. Because bears live in remote, rugged, and densely vegetated environments, they are otherwise very difficult to survey. Knowing how many bears roam this part of the world is central to managing their numbers.