Glaciers, lichens, and the history of the Earth

On her second visit to Glacier National Park in 1894, Mary Vaux (pronounced “vox”) was aghast at how the Illecillewaet Glacier had retreated since her previous visit seven years earlier. The lowest edge of the Great Glacier, as it was also known then, was clearly withdrawing upslope. We now know that most of the world’s glaciers were in retreat then, as they are now. 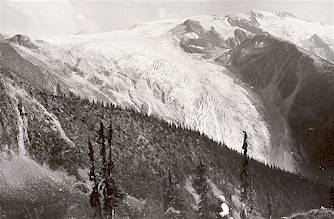 The oldest child of an affluent, well-educated Quaker family from Philadelphia, Pennsylvania, she urged her brothers William and George to undertake a study of this remarkable natural feature. Setting out with surveying gear and the first Kodak cameras they became North America’s first glaciologists. The Vaux family returned to their Illecillewaet Glacier surveys every summer until 1913. Though amateurs, their surveys were among the most comprehensive anywhere at that time.

The Vaux’s were part of the Glacier House clientele, people from Europe and eastern North America who boarded the Canadian Pacific Railway in Montreal to visit the Canadian Alps. They enjoyed staying at CPR hotels, which were situated to take advantage of the best scenery in the Rocky and Columbia Mountains. One of these, Glacier House, operated from 1887 to 1925 near the present day site of Illecillewaet Campground and was famous for its amenities in the wilderness – such as Swiss mountain guides and the second ever hydroelectric generator in British Columbia.

Mary developed her photographs in a make-shift darkroom in the Glacier House basement and presented her glacier adventures by showing her photographs with an early form of projector known as a magic lantern. The Vaux photos show our glaciers at the end of a relatively cool period in the Earth’s climatic history. Since then the toe of the Illecillewaet Glacier has receded two kilometers. 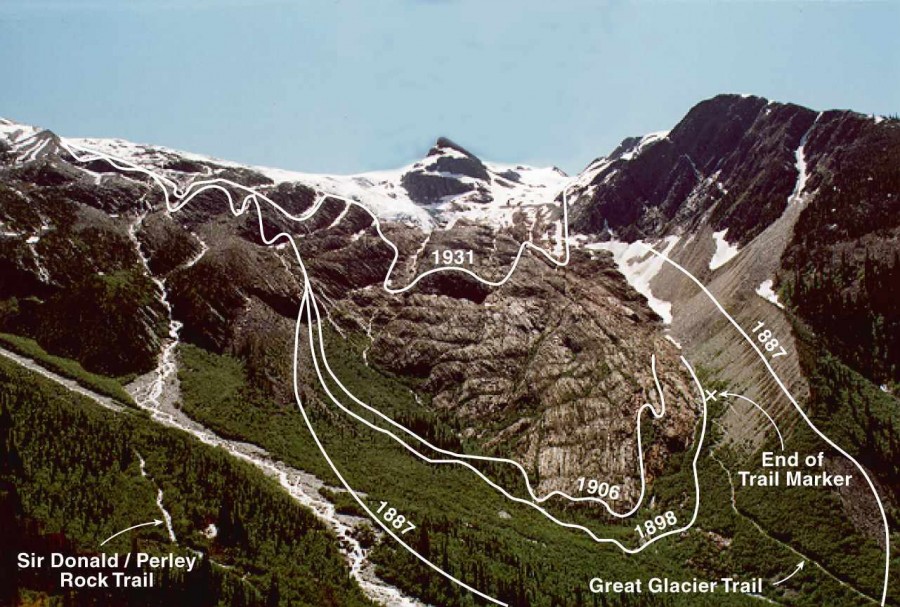 The Vaux family helped the scientific world explain the processes that shaped our planet. Studying glacial features at the scale of individual glaciers led scientists to recognize the effects of glaciation on a much larger scale. That nearly all of Canada has been covered in glacial ice, in some places two kilometers thick, five times in the past million years, ranks as one of the great achievements of scientific deduction.

Dr. Dan McCarthy of Brock University in Ontario carries on the Vaux tradition of studying environmental change, in a different way. Since 1996, he has spent his summers monitoring lichen growth near the Illecillewaet Glacier, and other places in the western mountains, as a way to measure the amount of time exposed rock has been free of ice.

Working with the most common lichen we see on rocks everywhere in the alpine, Apple-green Map Lichen (Rhizocarpon geographicum), Dr. McCarthy has determined that these lichen grow about a millimeter in five years. Though these patches of bright green lichen seem barely alive, some can live for 300 hundred years. By correlating lichen measurements with tree-ring growth and other scientific information, he can estimate the age of landscape creating events such as glacial retreats, landslides, and earthquakes.

The Vaux family had the foresight to record what was going on around them, providing us a baseline to compare the park then and now. Today, studying glaciers and other natural phenomenon may help us understand how our climate is changing. As we enter a time of warmer temperatures world-wide, national parks can provide benchmarks to gauge the ecological effects of climate change. Your vacation photos may be the documentary material of the future!