Bears are omnivores able to eat hundreds of different species of plants. Typically, a grizzly bear’s diet in the Columbia Mountains consists of about 15% meat, carrion, small mammals, and insects. The remainder is roots, herbs, or berries, depending on the season. Natural food sources vary year to year, which is why bears need large areas in which to roam. They’re always on the lookout for new sources, and they find human garbage appealing. 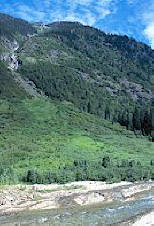 South facing avalanche paths are key spring habitats. These are productive sites for bear foods, in particular the bulbs of glacier lilies, because the absence of trees allows more sunlight to reach the ground. The soil in lower portion of a slide path has been built up by many years of climax avalanches that bring down nutrients from higher slopes and there is usually ample moisture. This produces a bountiful supply of plants (sedges, cow parsnip, hellebore) that bears can eat. Like us, they prefer the fresh and tender shoots of new growth, which are also more nutritious. As summer progresses, bears follow the retreating snowline to take advantage of the emerging new growth.

Dominant male grizzly bears are thought to take the best feeding sites. Females and cubs use habitat of secondary quality to avoid confrontations with larger males who are aggressive toward anything that is competing for food. An exception to this are productive berry patches like the one south of Glacier Circle in Glacier National Park, which can have concentrations of male bears in late summer and fall.

Because of its sugar content, the huckleberry is the berry of choice for bears and people in the interior wetbelt. The best huckleberry patches occur about 25 years after a forest fire. It takes that much time for berry plants to sucker up into large, multi-part bushes. They take advantage of the increased sunlight reaching the ground and the nutrients released to the soil after a fire. Long-term fire suppression, while useful for managing other resource values, may have a detrimental effect on future berry production.

Bears are opportunists, always looking for something to eat and will investigate new smells. Protein rich foods are not abundant in the Columbia Mountains. Deep snow limits ungulate numbers and available carcasses. Hydroelectric dams built on the Columbia River put the high productivity of valley bottom wetlands under water and eliminated salmon runs, both important food sources for bears that can not be replaced. 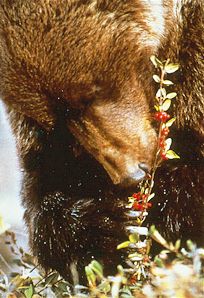 Bears eat a lot of berries through the summer and fall to put on the necessary weight to survive hibernation.
Parks Canada Collection.

Adult bears in the den do not eat, defecate, or urinate for six months. Amazingly, they can emerge from the den after a winter ‘s snooze having lost 25% of their body weight. Unlike us, bears are able to metabolize waste products and some how avoid the loss of bone density during their long sleep.

Bears are able to accomplish this great fast because they can eat so much during the summer. But this also why bears are attracted to prime sources of food and can be aggressive towards perceived competitors.

For female black bears studied by the Upper Columbia Bear Research Project (UCBRP), stored fat is crucial to nursing a litter 2 or 3 cubs, each weighing about 500 grams when born in February, and who will weigh 2500 grams six weeks later. Radio collars allow researchers to locate dens in winter, sedate the sow, and count and weigh cubs. Researchers have not risked visiting a grizzly den in winter.

Reproduction is another bear motivator. Quite simply, bigger the bear, the better the chances of reproducing. In nature, passing on genes in the only measure of success. For males, being bigger means access to females simply by being able to fight off other males. Bears mate in June but the embryo does not implant until fall, likely in response to adequate fat reserves in the female‘s body.

Grizzlies have an especially low rate of reproduction. Females reach sexual maturity around age six and have raise litters at least three years apart. Cub mortality is high, with only half surviving the first year. UCBRP results show an overall mortality rate of 11%. Wildlife managers consider a rate 5% or less is what is needed for a sustainable population.

More worrisome is the lack of young female bears in the UCBRP study sample. Are young female bears less susceptible to capture or are they simply not out there? Maintaining females in secure areas is key to keeping these animals on the landscape. Radio collar results from the study show intense use of Cougar Valley in Glacier National Park by female grizzlies, supporting the 1996 decision by Parks Canada to restrict human use there in summer for the safety of park visitors and to provide female grizzlies a rare sanctuary from disturbance.