Ecological conditions— terrain, climate, soil, vegetation, natural disasters, and so on, determine what animal can live where. Wildlife find food, shelter, and mates where conditions best match their particular way of living. Some species, like mountain caribou, have very particular requirements. Other species, like white-tailed deer, moose, and black bears, are generalists. They are able to make use of a much wider range of conditions.

Humans benefit enormously from our ability to develop natural resources, but where our actions alter habitats there are consequences to wildlife. Wildlife biologists are often tasked with developing strategies to mitigate habitat changes caused by human activities. “Wildlife management” is really about managing human behaviors. 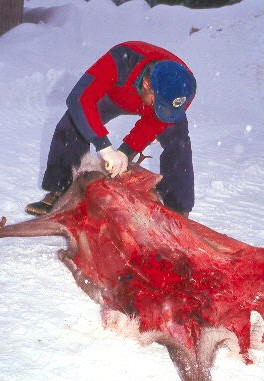 Wildlife biologists try to determine the cause of death of caribou when possible. Note the lack of fat reserve on this animal. Bob Brade photo.

While the long term decline of caribou can be attributed to changes in habitat due to human activities, the drastic declines in the past five years are not well understood, especially in Mount Revelstoke and Glacier National Parks, where habitats have not apparently changed.

The suspicion among some wildlife biologists is that the young forests that emerge after harvesting old growth forests produce an abundance of food for moose and deer. As these ungulate populations grow so can that of their predators, wolves, and cougars. The theory is that these predators may be preying incidentally upon on caribou more than before. However, there is as yet no evidence that this is occurring to an abnormal degree. Wildlife biologists now want to collar cougars and wolves to determine their effect on caribou.

“Caribou decline may be related to too much energy spent on just trying to stay alive. Over the past summer, the three caribou mortalities I investigated had no body fat, which is bound to have an effect on calf production. Census results here show that the proportion of calves in the herd are below replacement level,” according to national park warden John Flaa.

Park biologist Susan Hall wonders, “Could the cumulative effects of loss of old growth forest habitat, the proliferation of densely stocked young forests that caribou avoid, combined with the barriers to caribou movement of the reservoir, Trans-Canada Highway, and the railway, and the disturbances from recreation, stress caribou enough to marginalize their ability to bear healthy calves?”

Caribou females give birth during the month of June in widely scattered, high elevation locations. Such dispersal is an adaptation to avoid predators when the calves are most vulnerable. But calves can’t be counted until the following April. How many calves are born and what happens to them over their first summer is unknown. Speculation that grizzly bears and wolverines may be eating caribou calves shortly after birth raises the interesting dilemma: Would the plight of one endangered species justify the reduction of other species only slightly less at risk?

When wildlife numbers get low the choices in wildlife management get messy. Better to maintain functioning habitat in the first place and let nature take care of itself.