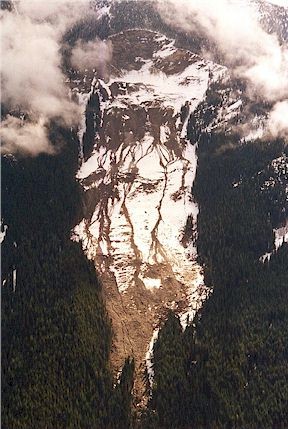 En route to Rogers Pass, Park Warden Tim Laboucane braked in time to avoid a debris flow on the highway. As he parked well back from the mess of muck, rock, and timber, he felt the shock wave and the subsequent roar of another landslide as it hurdled down on to the Trans-Canada Highway, just west of Glacier National Park.

While new and unexpected debris flows have occurred along the highway in recent weeks, park staff expect this sort of trouble each spring at the Heather Mountain landslide near the eastern boundary of Glacier National Park. Slumping on Heather Mountain was first noticed by helicopter pilot Don McTighe in January 1997 when an unseasonably warm front including heavy rain caused water to percolate into the exposed fractures near the top of Heather Mountain. When the weather cooled quickly to minus 20 degrees Celsius, the rock face froze and the pressure of trapped water in behind the face created the slope separation.
Flying for nearby heli-skiers, McTighe watched the cracks in the slope grow day by day. Blocks failed and slid, and by spring grew into a massive debris flow that ended up as mud on the highway. Here the failing rock is a talc-rich mica schist that is strong enough when dry but disintegrates easily when it comes in contact with water. Talc is the same mineral as in talcum powder. Over the next two springs, the exposed surface was eroded and lubricated by the combination of rain and melting snow, creating an mountainside gash about two kilometers long and half a kilometer wide. It’s a wound that continues to ooze each spring, some years more than others, depending on the rate of melt of the snowpack and concurrent rain events.

While checking this place out I noticed that the freshly broken rocks on the landslide have an iridescent sheen and smell like rotting vegetation. The newly exposed surface is a mix of small and large boulders and mud as slick as soap. Walking across it was a process of finding the least slippery spots. Then there’s the clatter of the occasional tumbling rock departing the headwall. It’s not a place to visit.

The bottom of the landslide is a jumble of shattered timber with several outlets of café-au-lait colored mud which flow through 500 meters of forest to a diversion berm. Culverts under the highway to help the mud on its way into the Beaver River. Sometimes the debris flow is more than the catchment basin and culverts can handle. The result is mud spread over the road and highway crews working around the clock, passing traffic whenever possible. 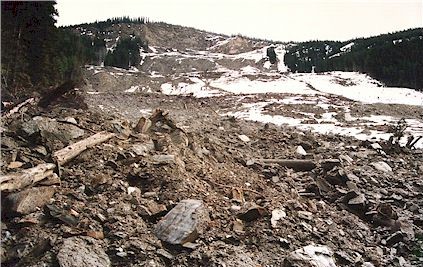 With the advice of scientists from the Geological Survey of Canada, Parks Canada established a monitoring program to keep an eye on this chronic safety concern. Similar to the remote weather recording stations used in the prediction of avalanche activity or forest fires, a site on Heather Mountain transmits temperature and precipitation amounts to Parks Canada’s Highway Service Section in Rogers Pass, alerting road crews that the debris flow may increase, though the situation remains far from predictable.

Recognized as a National Historic Site because of its role in national transportation history, the Rogers Pass story continues to unfold. Landslides, avalanches, floods and other land-forming events occur all through the mountains but are only noticed when it interferes with our activities.

The road crews, flag persons, and park wardens that work on the highway contribute to an essential service that sees ever-increasing expectations. On the highway we’ve come to expect to get from point A to point B in a certain amount of time and are put out if we are delayed. However, the mountains don’t care. Occasionally the highway is closed for safety reasons as we respect that not everything in these rugged mountains can be controlled.