Life in the snow forest

My two companions and I set off to ski the Summit Trail on Mount Revelstoke, a trip of ten kilometers and 1360 vertical meters. In summer, thousands of visitors use Mount Revelstoke’s 26 kilometer paved road to reach the summit. But snow covers the summit area for nine months of the year. We wanted to experience a familiar place in a different season.

As we ascended on skis, we heard the distant rumbling of the Canadian Pacific Railway and the whine of the sawmill, also familiar sounds to the first skiers who reached the summit in 1906. As the noises of town faded behind us, the twitter of birds became more apparent. We could barely see them among the cedar and hemlock branches but we could identify them by their sounds. Aboriginal people called the Revelstoke area “the place of chickadees.” Remarkably, four chickadee species (black-capped, chestnut-backed, mountain, and boreal) can be present on Mount Revelstoke.

Due to the valley’s mild winter temperatures, snow conditions are typically crunchy at the start of the trail, but improve quickly with the cooler temperatures of higher elevations. Half way up the mountain, the forest changes to spruce and subalpine fir, with trees so widely spaced that the trail corridor is no longer discernable. A compass helped set our course, as forest and cloud obscured the surrounding landmarks.

Trail breaking was thigh deep by the time we reached Balsam Lake Cabin, a park patrol cabin one kilometer below the summit area. Only the point of its roof protruded through the snow. We reached the front door by descending a ladder left on the front porch the previous fall just for this purpose. Damp from a day of snowfall melting on us, it was a pleasant relief to relax beside the wood heater. Caribou Cabin, also in the vicinity, is available for public use in winter.

The next day, we headed to the summit surrounded in fog, which broke just as we reached the historic fire lookout. It sits on the highest of several knobs that protrude from a mix of undulating snowfields and treed ridges. Probing the snow, we found an average depth of 340 centimetres. To live here, a plant or animal must be adapted to deep snow.

Beginning in October, successive snowfalls deepen the snow cover through the winter, usually reaching a maximum height on the ground of three or four meters by April. Ground bare of snow does not appear until July and in some places snow patches linger into August. Life in the subalpine evolved to cope with snow and in some ways depends on it. Subalpine fir is the only tree that can withstand the snow load at this elevation in the Columbia Mountains. Their spire-like form sheds much of newly fallen snow. Such an efficient shape is maintained by constant pruning, the result of the combined action of snow frozen on the branch tips snapped off by windstorms. 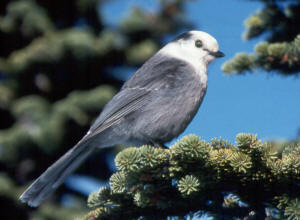 The slightly higher ridges on Mount Revelstoke emerge from snow first, providing subalpine fir just enough of a growing season. The dips in between the ridges hold snow so late that only herbaceous plants, such as glacier lilies and sedges, can manage such short snow free season. Glacier lilies rely on a starch filled root, the stored energy of last summer, to push their flower through the lingering snow.
Not long after reaching the summit, a pair of gray jays spotted us. Also known as “camp robbers” they are attentive to humans, often receiving food bits from summer visitors despite park regulations. As permanent residents of the subalpine, they cope with the long winter by storing food throughout the summer for later use. Jays gather insects, berries, tree seeds, fungi, or carrion, then coat it with sticky saliva and stash it behind flakes of bark, under tufts of lichen, in tree forks, or among tree needles. A researcher documented an individual jay making over 1000 such caches in a 17 hour period. Cold weather works in their favour, helping to preserve food for later use. Nesting for jays occurs in late winter, a time of few predators. But imagine the memory required for retrieving all that stored food!

Mountain caribou evolved a unique strategy to cope with the deep snow pack of the Columbia Mountains, moving up and down the mountains twice a year. They spend the late fall and early winter under the shelter of big old trees at low elevations. The closed canopy of old growth forests intercepts much of the early season snow, making it easy for caribou to find forage, particularly mountain boxwood, their favourite evergreen shrub.

As the snow deepens, digging for food uses more energy than is gained. Unlike any other ungulate, caribou move upslope in midwinter. They seek the lichens that grow on trees. To find lichen in early winter, before the snowpack has settled, caribou range widely seeking the random results of winter storms that break off branches or knock down complete trees. This is more likely to happen in older trees where fungus has penetrated the roots, weakened the limbs, and rotten the core.

“Witches hair” and “old man’s beard” are two of the common names of Alectoria (a bright green hair lichen) and Bryoria (a dark brown hair lichen) that caribou rely on the most. Both exist top to bottom on Mount Revelstoke but Alectoria is more common at lower elevations and Bryoria predominates at the higher elevations. Trials with captive animals show that caribou prefer Bryoria.

Caribou can spread their hooves and dewclaws to act as small snowshoes. On a previous trip on Mount Revelstoke, I experienced first hand their ability to move on snow. As soon as they picked up on my presence they loped off with astonishing ease leaving me, on skis, far behind.

By late winter, caribou are in the upper subalpine forest where a three or four meter deep snowpack is typical. This depth of snow enables caribou to reach lichens growing higher in the trees, which, without the snow, they would not be able to reach. Winters with below average snowpack lessen caribou’s chances at finding enough lichen to eat.

As soon as plants green up in spring at low elevations caribou head down to the valley for something fresh to eat. Then they move upslope a second time. In June, before the snow has melted in the alpine, the pregnant cows seek out solitary locations to avoid predators such as grizzly bears. Caribou spend the summer in the subalpine meadows feeding on meadow plants at their peak of nutrition. 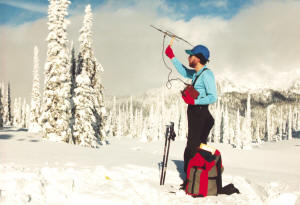 National park biologists participate in caribou research with adjacent land use managers to study the habitat needs of these wide ranging animals. Because Mount Revelstoke National Park is smaller than the area these animals require for their annual movements, it‘s important to keep sufficient habitat for them outside the park as well.

Regional censuses indicate that the caribou herd that traditionally ranged in and out of the park has declined drastically. We did not find caribou tracks on this trip but the recent snowfall could account for that.

Heavy snowfall throughout the third day created deep ski penetration, so much that on the gentler slopes, we had to break trail going downhill. As we approached the valley, the air temperature rose and the consistency of the snow transformed progressively towards heavy crud. Before we reached the base of the mountain, the falling snow changed to rain and soaked us through.