The animal most dependent on a steep environment is the mountain goat. No four-footed predator can pursue mountain goats once they reach the relative safety of a cliff. They’re able to negotiate cliffs without the equipment used by human climbers, using just an inborn sense of balance, agility and specialised non-skid hooves. Their only threat from predators comes from above. With their two-meter wingspan, Golden Eagles can knock kids from their ledges.

Mountain goats are considered the most common large mammal in Mount Revelstoke and Glacier National Parks. A survey twenty years ago found more than 300 mountain goats in these two parks. They outnumbered bears, moose, elk and deer combined. 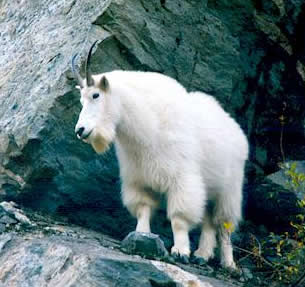 In summer, mountain goats graze on the fresh greenery of alpine meadows, seldom far from escape terrain, staying alert for grizzly bears. This is the time of year they shed their dense coats. It detaches in ragged clumps, giving them a scruffy look. When hiking along alpine ridges, I occasionally find clumps of their white fur snagged on branches.

In winter, mountain goats cling to cliff faces and wind blown ridges too steep for snow to build up on. Wind reduces snow cover, making digging for food easier. But falling rock and ice, avalanches, and icy surfaces continually threaten their security.

Males enter winter with fat reserves depleted by the rigours of the rut and they continue to compete with each other for the best feeding areas. Weaker mountain goats face possible starvation each winter. The most vulnerable are the yearlings, about half of which do not survive their first year. Both males and females have sharp black horns, but the males will not challenge pregnant females for the best winter forage.

Male and female mountain goats are indistinguishable at a distance. Up close, male horns are have a uniform curve, female horns have a slight bend near the tip. Like mountain sheep, mountain goat horns grow a bit each summer resulting in an annual growth ring, which can be used to age an animal. (Moose, deer, elk, and caribou have antlers, which fall off each year.)

Aggression among males is ritualised with feints and counter feints. An up thrust blow to the abdomen by a sharp goat horn will almost certainly be fatal due to the accompanying infection and the energy demands of winter. However, in battles for dominance few goring blows are ever landed. Usually after a brief tussle the weaker male realises his inadequacy and backs off.

On Mount Tupper, just east of Rogers Pass, mountain goats face the unusual problem of artillery fire from the 105 mm howitzer used to control avalanches that affect the Trans-Canada Highway. I’ve watched them through binoculars as the booming howitzer shots are fired. The goats seem unaffected by the sound. Remarkably, the Mount Tupper herd remains the largest in the park, wintering just out of range of the exploding shrapnel and subsequent avalanches.

As with other animals, mountain goats come to the road shoulders to lick salt spread to keep the road ice-free. When frightened by predators or passing vehicles, they run to the security of their cliffs. If the cliff is on the far side of the road, watch out, because a mountain goat may come hurtling across the road in front of your vehicle.

You are most likely to see mountain goats on cliffy south-facing slopes above the snowsheds on Mount Tupper and on the rock-cuts along the highway near the eastern boundary of Glacier National Park. Pull well off the road when watching wildlife.

The status of mountain goat in the parks today is uncertain. Surveys of mountain goat populations outside the parks indicate that their numbers have declined sharply in recent years. Over the next five years, monitoring mountain goats in boundary areas will be a priority for Parks Canada’s research program.