Years ago, I guided army cadets on training sessions across the Wapta Icefield. Starting at Bow Lake in Banff National Park, we quickly left behind trees, birds and most anything else alive to ascend the icefield and its adjoining peaks. Even in the middle of summer this expanse of rock and ice was sheathed in snow, creating an austere but flawlessly pure scene stretching 25 kilometers along the Great Divide. Especially in the warmer afternoons, we were accompanied by the sound of the icefield’s meltwaters cascading over cliffs and churning through gorges as it rushed to feed Bow Lake. I couldn’t imagine a place less touched by pollution.

Later, in 1992, researchers discovered that tissue samples from fish in Bow Lake showed contamination from a wide range of persistent organic pollutants (POPs) such as DDT, PCBs, toxaphene, hexachlorobenzene and others. Subsequent investigations found varying amounts of POPs widespread in alpine lakes. The higher elevation lakes with the larger catchment basins and greater snowfalls had the highest concentrations of toxins. It appears that snowflakes are especially good at extracting organic compounds from the air.

Finding any amount of these compounds in otherwise pristine alpine lakes comes as a rude surprise, as most of these substances are banned in Canada and the United States. It turns out that the northern half of our planet’s atmosphere behaves as a gigantic still. Chemicals used in agriculture and industry in Asia evaporate in these warm areas, are then carried by air currents, and condense in cooler areas. This effect has been known in the Canadian Arctic since the 1970s.

The amount of toxin in the water of alpine lakes of the Rocky Mountains and Columbia Mountains is extremely small. However, toxins show up in fish because they have been concentrated first by algae living in the water. Algae are consumed by zooplankton, zooplankton are eaten by aquatic insects, which in turn are food for fish. Each stage in this food chain magnifies the concentration of chemicals by a factor of about ten. 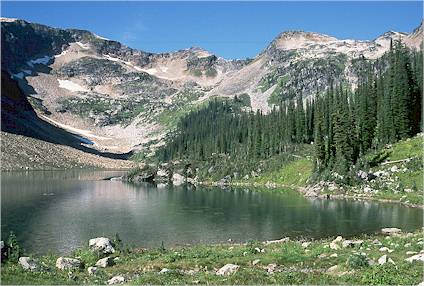 The lakes in Mount Revelstoke National Park are the most reliable place I know for seeing fish. The setting is splendid. The waters are always clear and trout can easily be seen hunting insects not far from shore. The fish are small but appear normal.

However, this is what Environment Canada technician Pat Shaw has to say about recent fish tissue samples from these lakes. “Total DDT levels in Upper Jade Lake are among the highest I’ve measured in the fish sampling I’ve done so far – high enough that were it not for the remote location, I’d be suspecting some sort of historical application. For reference, the values there were a couple of times higher than in fish we’ve collected in Veracruz in Mexico – where I’d be inclined to expect high levels.”

Fish in these alpine lakes grow slowly and some are unusually long lived for trout, up to 20 years, thus giving them more time to accumulate toxins in their body tissues.

During the brief ice free season on these lakes I’ve watched osprey catch fish, though how often they do this is unknown. Consuming a lot of these fish could be detrimental as compounds such as DDT are known to wreak havoc with sexual development and reproduction in predators at the top the food chain.

Then there’s the matter of the presence of fish in high mountain lakes in the first place. Lakes above treeline almost never have fish naturally. In the past, many fishless lakes in national parks were stocked with rainbow trout and eastern brook trout to provide a recreational activity. Stocking ceased in the 1970s but these non-native fish stocks persist in some lakes and continue to eat the native aquatic community. The wholesale removal of fish from lakes on Mount Revelstoke and Glacier is not being considered. Instead, occasional sampling of these fish can serve as a way to monitor the amount of long range POPs in our environment.

This summer will be the 30th anniversary of my first visit to Upper Jade Lake. While I’m there, I intend to keep a lookout for osprey activity. I’ll drink the water as I always have (that‘s another story), but I won’t be fishing.