Grizzly bears are notoriously difficult to census. Population estimates for all British Columbia vary from 6,000 to 12,000 – about half the remaining population in Canada. Yoho, Kootenay, Mount Revelstoke, and Glacier national parks are used extensively by grizzly bears but most leave the park at times during their annual travels. Alone, these parks are too small to provide enough habitat for a viable population of grizzlies.

Resource managers are faced with basic questions when managing any species. How many are there? Where are they at different times of year? Does their food supply vary year to year? How many die each year? How many are born and live to reproduce? These are important questions for researchers to answer, so that wildlife managers can develop effective strategies. Because bears often live in remote, rugged, and densely vegetated environments, they are difficult to count.

Researchers from the Upper Columbia Bear Research Project (UCBRP) tasked with answering these questions had to invent methods to find out. DNA analysis pioneered by the University of Alberta and biologists operating here in the upper Columbia drainage, combined high-tech laboratory techniques with low-tech field ingenuity to devise a method of population sampling by using hair samples gathered on barbed wire. Variations of the technique is now used around the world as a less intrusive way monitor several species of wildlife.

The UCBRP is a partnership to study bears on an ecosystem basis. It is lead by Dr. John Woods of Parks Canada and Dr. Bruce McLellan of the BC Ministry of Forests, and receives assistance from the BC Ministry of Water, Land and Air Protection, the universities of Alberta, British Columbia and Calgary, the Columbia Basin Fish & Wildlife Compensation Program and the Friends of Mount Revelstoke and Glacier.

The 5000 square kilometer study area is centred on Donald, British Columbia. The area spans a variety of habitats and management systems including portions of Glacier and Yoho national parks, managed forests, urban and rural settlement, and land flooded by hydro-electric development. In addition, the area is traversed by the Trans-Canada Highway and the Canadian Pacific Railway. In effect, it is a microcosm of the developments occurring in many parts of bear range in British Columbia and elsewhere.

Researchers capture bears and attach radio collars. These are essential because of the difficult terrain for tracking and locating bears. Collared bears are tracked weekly, mostly from low flying aircraft but also from the ground, to see what sort of habitat they use. Home ranges and movements are then determined. Here, the home range of 18 female grizzlies averaged 130 square km each, while 22 male grizzlies averaged 578 square km each.

The captures are accomplished by culvert traps or foot snares after which the bear is darted with an immobilising drug. Some bears are darted with a gun from a helicopter. This allows researchers to measure, sample, and re-fit radio collars. Care is taken to ensure the collars attachments are flimsy enough to come off in a few months or years, depending on the age of the bear, so that it does not become tight around the neck. A bear can gain and loose up to a quarter of its body weight in a year as it fattens up for winter then loses weight by spring. Males tend to keep growing throughout their life. 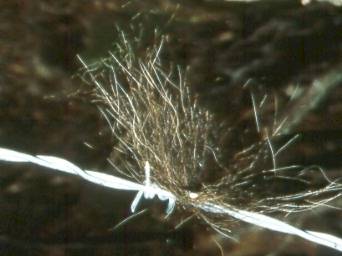 Bear hair samples are collected and kept in individual envelopes which are then sent to a laboratory.
Parks Canada Collection.

Recent developments in DNA fingerprinting technology can identify individual bears from a drop of blood or a few strands of hair. It is also possible to trace the lineage of bears within the population, giving insights into bear social structures. Hair is collected when bears walk over or under barbed wire adjacent to scent lures. After the hair is collected, those with visible roots are kept for DNA analysis. In a three year census, the team collected 4500 hair samples to reliably identify species, sex, and individuality of free ranging bears. This new method of census is less intrusive than capturing bears and has numerous applications in field studies and censuses.

If researchers have learned anything it is that knowing how many bears there are, may never be known with absolute certainty. In a three-year census period the estimates for the number of grizzly bears in the study area ranged from 95 to 125. Calculating these numbers is confounded by individual bears wandering outside the study area and uncertainties inherent in dealing with a small sample size.

Science is a powerful tool that can provide us with good information, but how we deal with this information is a cultural matter. Ultimately, we make decisions regarding natural resources is based on our values, so the goal of ecological integrity can only be realized if there exists sufficient social acceptance. Yet, we are unaccustomed to acknowledging and expressing our values regarding our ecological aspirations. Keeping bears on the landscape will require a conscious choice on our part to do so.