In greater numbers than most years, Western Conifer Seed Bugs are moving into our homes. Sensing the approach of cool weather they are attracted to warm places to spend the winter.

As their name suggests, the Western Conifer Seed Bug makes its living from eating the seeds in tree cones – principally Douglas fir, western white pine, and lodgepole pine. Their needle-like mouth parts can penetrate the outer scales of a tree cone and the outer seed coat. The seed contents are dissolved by their salivary enzymes and then sucked out. The loss of tree seeds to seed bugs is not considered significant to the propagation of our forests.

Seed bugs produce a strong, sickly sweet odour and excrete it though their rear end. It’s their version of a chemical weapon used to discourage predators. Seed bugs are members of a larger group of insects known as the stinkbugs, some of which are much more stinky than our local representatives. Attracted by their own smell, seed bugs sometimes congregate in large numbers as a defensive strategy to intensify the effect of the release of a small amount of odour by individual bugs. 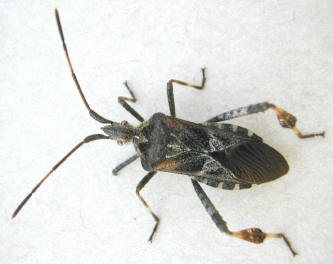 Seed bugs aren’t alone in nature using chemical weapons. Some life forms are rather aggressive about it in comparison. Scorpions and venomous snakes use internally produced chemical compounds to capture prey. Plants (mint, sagebrush, bracken fern) are also capable of exuding aromatic substances that retard the germination of other plant species.

Like any weapon, ammunition is expensive to produce. Seed bugs are unlikely to use their chemical arsenal unless they feel threatened. Picking them up gently by the antennae is a good way to throw them out a window. This hold doesn’t seem to upset them too much. At least keeps their rear end pointed away from you. Squashing a Western Conifer Seed Bug will assuredly release the odour you are trying to avoid.

Seed bugs are but one of thousands of invertebrate species of which we know very little. But given how many species of insects live in Mount Revelstoke and Glacier National Parks and how many of them there are at times, invertebrates together represent the majority of animal biomass in this region and are a significant factor in the ecosystem.

Hemlock loopers, a pale brown moth that eats hemlock needles and whose numbers explode cyclically, are also at a peak. From the perspective of a hemlock tree, these moths eat them alive. By their sheer numbers, the hemlock loopers can kill hemlock trees by completely stripping them bare of leaves. Many brown trees can be seen north of Revelstoke because of the appetite of these moths over the past two summers. And dead trees catch fire much more readily than lives ones. Be it loopers or pine bark beetles, insects figure into the flammability of a forest.

Typically we ignore insects until they bother us. The most recent concern on a national scale is the possible spread of mosquitoes carrying West Nile virus. Fortunately, our climate is cold enough to prevent the type of mosquito that caries malaria from living here at all. More people in the world die of malaria than any other disease. Instead we have the odoriferous but comparatively benign seed bug.