Just about every Canadian has shoveled snow, but John Kelly wields his shovel with a greater purpose. He digs snow profiles, searching for weak layers in the snowpack as part of the avalanche safety program for the Trans Canada Highway through Glacier National Park.

Each snowfall is a chapter in the book of winter, created under a unique set of weather conditions. Temperature, humidity, wind and other factors, affect the size and shape of snow crystals and how well the crystals bond to each other. Crystals change over days and weeks, depending on the temperature. The changes are subtle to the untrained eye but significant enough to make the difference between snow that stays on the mountainside, and snow that cascades into a billowing mass moving up to 200 kilometers per hour, sometimes leaving debris 15 meters deep on the highway.

The combination of heavy snowfalls, steep terrain, a railway, and a highway, makes Rogers Pass the most significant avalanche area in North America. Commemorated as a National Historic Site because of its role in Canadian nation building, the Rogers Pass story continues to unfold. Since 1970, winter traffic has tripled making traffic management during a road closure nearly as complicated as the science of snow.

The control program is carried out by a crew of 8 assisted by a 14 person military contingent who handle the 105 mm howitzer, a weapon of the Korean War. Firing the gun is the end result of snow stability monitoring carried out by a team lead by Dave Skjonsberg. He sends John Kelly and others out to where avalanches begin, on the high slopes at or above treeline. Thirty years of experience in Rogers Pass guides Dave to choose where to send his field personnel. They climb on skis to slopes representative of those that generate avalanches. To study snow conditions they need undisturbed slopes where the snowpack resembles conditions found where avalanches start, but without actually being avalanche starting zones themselves.

The finesse part of Dave’s job is knowing when the snowpack is ripe to respond to artillery fire. Some storms in the Selkirk Mountains leave behind a meter or more of new snow. The avalanche hazard then is relatively obvious. But there are other times when it is less so. A period of clear, cold weather, no wind and high humidity causes feather-like hoar crystals to form on the surface of the snow. Later these are buried by progressive snowfalls. But surface hoar crystals are notorious for bonding poorly with the snow above. This is one kind of situation in the snowpack John seeks with his magnifying glass. 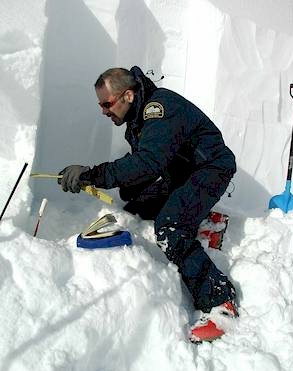 With his shovel he meticulously shaves a vertical face from the top of the snow to the ground, a depth of three meters or more. Each snow storm constitutes a layer relatively weaker or stronger than its neighbour. When the weight above a weakness exceeds the bonding strength of the layer below, the snow slope will fail.

The avalanche control program tries to anticipate this failure and nudge the snow slope with artillery to release an avalanche, at a time when the highway is closed to traffic.

How well it works depends on how well Dave and John and can read the story in the snow.