The ecology of forest mushrooms

When the autumn rains follow the heat of summer, mushrooms appear on the forest floor in the greatest diversity of the year. The mushrooms we see on the surface are merely the fruiting body of the much larger main body of the fungus. Most of the mass of a fungus lies unseen in the soil, a vast web-like entity that waits for the right conditions before sending up its fruiting bodies to release huge numbers of tiny spores, each with the potential of establishing another fungus. 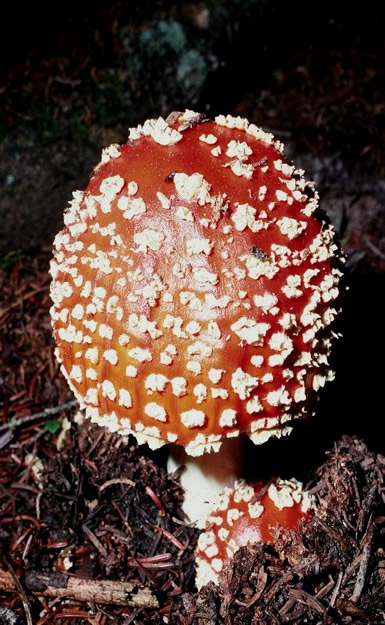 The toxic Amanita muscaria figures in the classic story Alice in Wonderland. It is found locally and throughout the world in northern countries. Wayne Lynch / Parks Canada photo

Fungi are unable to produce their own food. Instead, they derive nutrients and moisture from a host organism. When the host is a plant, they accomplish this in one of three ways. One type attacks plants causing disease and death. An exampler of this in trees is “root rot,” an invader of roots that rob the tree’s nutrition and diminishes the strength of the base of the trunk. Eventually, a windstorm will blow down a stand of trees impoverished in this way, providing a bonanza to a second type of fungus that invades dead plants, decays plant matter, and recycles nutrients back into the soil.

A third type of fungus coexists with trees for their mutual benefit. The filaments of underground fungus increase the surface area in which tree roots can take up water and nutrients. In return, the fungus gets sugars produced by the tree through photosynthesis. There are many kinds of fungi that grow in this way, and each prefers a particular species of plant or tree. Trees can survive without these cooperative fungi, but they grow much faster when these fungi are present. Truffles are the underground reproductive body of one kind of this fungi. Truffles are tunnelled for, and eaten by, mice and voles, which in turn disperse the fungal spores through their droppings, thus inoculating trees nearby.

Fungi can be a good food source, high in protein with a wide range of vitamins and minerals, though the total nutrient content will vary considerably with species and conditions. Many forest animals, particularly flying squirrels, deer, and pack rats, consume them to some degree.

For some people mushroom hunting is a recreational experience – an excuse to roam the forests. For others, it’s perceived as a way to make some money fast. This isn’t usually the case, but the lure is akin to a gold rush. In recent years the demand for wild mushrooms internationally has resulted in thousands of British Columbians taking to the woods in search of a few valuable species. Some years, millions of dollars worth of mushrooms are harvested in this unregulated activity.

The most sought after is the pine mushroom, favoured by the Japanese, which sometimes fetches as much as $40 per kilogram for the top grade. However, this year there are fewer mushrooms in southern British Columbia due to the particularly dry summer. Normally, lack of supply would drive up the price, but a bumper crop in Korea is keeping the price down. Morels and chanterelles are also collected for European customers but typically make up a much smaller percentage of mushroom picker revenue.

If harvested carefully, mushrooms are a renewable resource. Knowledgeable pickers leave broken or over mature mushrooms in place as they may still be spreading spores, the fungal version of seeds. Smaller than dust, spores are remarkably durable and can sometimes drift great distances in the atmosphere.

Picking mushrooms is permitted on provincial forest lands; requires permission on tree farm licences, leased crown land and private land; and is not permitted in national parks, provincial parks, or ecological reserves. The Beaver Valley Trail in Glacier National Park is a good place to view the myriad forms and colours of these fast appearing and disappearing forest spirits.

Of the many species of mushrooms in the Columbia Mountains, only a few kinds are considered delectable. Many are not pleasant tasting and a significant number are dangerous to eat. At least two species found here are deadly poisonous. Some people are allergic to commonly edible varieties and some mushrooms become toxic when consumed with alcohol. If you plan to eat what you pick, consult an experienced picker and use a field guidebook to ensure proper species identification.