On June 16, 2001 a MacGillivray’s Warbler returned for the ninth consecutive year to the bird banding station at the Skunk Cabbage Nature Trail in Mount Revelstoke National Park. “Nine years is a longer lifespan than we expected to find in such small creatures,” said John Woods, Wildlife Specialist for the park. 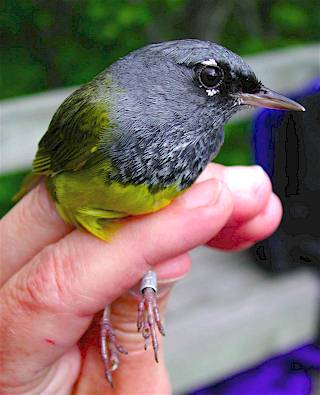 Two weeks before, a Veery (a member of the thrush family) was recaptured after an eight year gap in its record. It becomes the second oldest bird in this study. Veerys winter in South America, from Columbia to Brazil. The combined distance of its return flights is greater than the circumference of the planet, quite a feat for such a small creature. About half of the bird species found in the park in summer go south for the winter.

The Skunk Cabbage site is the only bird banding station in British Columbia where breeding songbird populations are monitored on a regular basis. Since the station opened in 1993, over a thousand individuals of 45 bird species have been banded. This site contributes to a North American study of bird population trends, known as MAPS (Monitoring Avian Productivity and Survivorship). Other North American bird studies have identified serious declines, particularly of neotropical migrants in eastern North America.

Though guided by Parks Canada and the Canadian Wildlife Service, bird banding is carried out by local volunteers, all members of the Friends of Mt. Revelstoke and Glacier. Before dawn, they set up mist nets to capture and band the birds, noting the species, age, sex, breeding status and general condition of the birds captured. They are expert in the handling of birds and have completed the certification required to handle birds covered by international agreements.

Their success has lead to the establishment of a second station at Machete Island, at Revelstoke, to monitor migrating birds that use the Columbia River valley as a travel corridor. You can see the volunteers at work in a new Parks Canada film “On The Edge” now showing at the Rogers Pass Centre.

These investigations seek to help answer broad ecosystem level questions such as where are birds coming from, where are they going, how stable are their populations, and most importantly, are their key habitats secure? To better accomplish this, more monitoring stations are needed in the breeding areas of Canada and Alaska and in the wintering grounds of Central and South America. Any volunteers?