A female Pileated Woodpecker is spending winter nights inside a large aspen on the lower slopes of Mount Revelstoke National Park, in the same cavity she raised her two chicks in the previous spring. This particular cavity has been in use by Pileated Woodpeckers most years since it was first excavated in 1990.

Her mate for life is roosting somewhere nearby in a similar cavity. I can hear them check in with each other each morning and evening about an hour after dawn and an hour before dusk. It’s an eerie cry reminiscent of something I would expect in a jungle. This call, along with rapid drumming on hollow trees, is their way of maintaining their pair bond as well as asserting their territory, which is something in the order of twenty square kilometers. 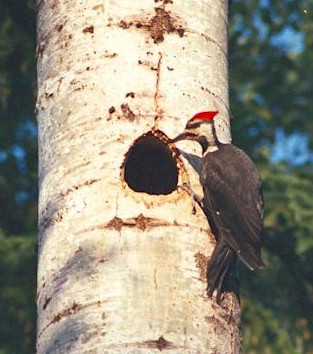 These woodpeckers are North America’s largest, about the size of a crow. They’re mostly black and white with a bright red crest on their heads. Their most prominent feature is a four centimetre long beak capable of chiselling large cavities in trees. Besides protection from weather, these cavities reduce the risk of predation from hawks. In a fallen aspen, I once found one of these roosting cavities that measured 15 centimetres in diameter and 48 centimetres deep. No other bird can carve such large holes in a tree.

Contrary to cartoon depictions, chiselling a nesting cavity is a slow, deliberate job spread out over a period of a few weeks in spring. The tree must have sufficient diameter to accommodate a sitting parent and later a couple of chicks that are nearly full size by the time they fledge. They make several exploratory holes, preferring in older, hollow trees or trees with centres softened by fungal decay, to make the job of cavity excavation easier.

Each April the female lays three or four eggs which both the male and female will take turns incubating. Typically only two chicks survive the 27 day period between hatching and flying. Fledged young remain with their parents until they disperse from the parents’ territory in late summer.

Many smaller cavities are created while searching for food. The woodpeckers listen for ant activity before they start chiselling their characteristic rectangular shaped openings in a tree’s outer shell. Many of these holes are made near the base of the tree as they seek their favourite food, carpenter ants. Nesting cavities have an oval opening.

A ten centimetre long, spear-like tongue with a barbed tip and coated with sticky saliva, enables these woodpeckers to catch insects in hard to reach places. They’re able to consume thousands of carpenter ants per day, but they also prey on larvae of bark beetles and spruce budworm, caterpillars, and moths. When available they also eat berries.

Cavities in trees created by Pileated Woodpeckers are crucially important to 50 species of tree cavity dwellers unable to create their own holes, such as flying squirrels, red squirrels, weasels, martens, bats, pygmy owls, saw-whet owls, boreal owls, and tree nesting ducks such as buffleheads and goldeneyes.

Pileated Woodpeckers play an important role in maintaining a diverse forest community, as do the large old trees that provide habitat for them and other cavity dwellers. Trees with holes in them are rotten to some extent and better left as wildlife trees. Keep this in mind when selecting trees for firewood or other purposes. Sooner or later it will be used by some critter!